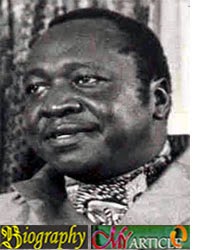 Idi Amin Dada is the third Ugandan President in power for nearly a decade in 1971 - 1979. Amin never wrote a biography about himself so that no one knows the precise date of his birth. However, records from several sources mention Idi Amin was born around 1925 in Koboko, North Nile province, Uganda.

Abandoned by his father since childhood, Idi Amin to undergo the rigors of life with his mother with farming. In 1941, he entered into an Islamic school in Uganda and a few years later went on living by working odd jobs until finally recruited, or forced to join, according to Amin, a member of the Armed Forces by a British Colonel. In 1949, Amin was sent to the northern region of Kenya to fight the Somali insurgency. In 1953, he was promoted as a corporal and six years later was awarded Afande, the highest position for blacks in the British Armed Forces.

In 1965, Amin cooperate with the Prime Minister Milton Obote to smuggle ivory and gold from Zaire to Uganda. The next year, he was appointed as Colonel of the Army of Uganda by the President at the time, King Mutesa II. However, three years later, Amin staged a coup to seize power Mutesa the displaced and exiled president to England until his death.

On February 2, 1971, Idi Amin of Uganda proclaimed president once the highest authority of the Army, Navy, and Air Force of the country. Running the government is tyrannical, Amin dictatorship inevitably make Uganda experienced a variety of civil war. He began his reign with the command Acholi and Lango eradicate because it is considered dangerous to its power. The command post, another murder based on motives of ethnic, economic, and political mutual followed one after another for eight years with a countless number of victims again.

On 20 July 2003, one of Amin's wives, Madina, reported that the tyrant ruler was in a coma and almost died at King Faisal Hospital, Jeddah, Saudi Arabia. Ranged month later, the official report of the authorities mentioned that Amin died on August 16, 2003 in Jeddah and was buried in Cemetery Ruwais, Jeddah.