Please Share this article is useful !
Horror still be one crazy genre by film enthusiast worldwide. Mystery of spirits, which until now is still questionable existence makes a lot of people curious to see his form. One way that feels safe and easy to see the ghost itself was watching a movie.

As a result, do not be surprised if it starts a lot of ghost stories new and different that presented by the producers of the film every time. Whether the story invented or taken from a true story, almost all successful horror movies always make the film enthusiast hysterical and screaming in horror, but addictive.

Despite a lot of horror movie titles that have been or are in the process of making, you must be very rare to hear or see the horror in the form of animation. Yup, the animation is very closely related to children's shows that are entertaining, but in Japan has recently appeared an animated series of successful horror spread terror in the audience every week. 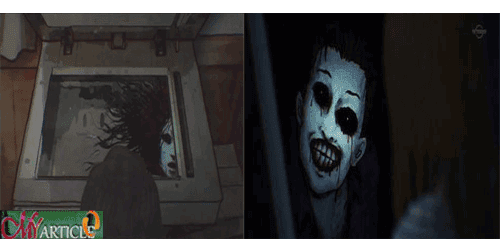 The title YAMI SHIBAI or Theater of Darkness in English. This animation was originally aired in July 2013 last month. Total existing second season aired and each season consists of 13 episodes. There are some uniqueness of this series are not owned by other impressions. The first is a super short duration of the broadcast. Yup, believe not believe, each episode of YAMI SHIBAI only lasted about 4 minutes.

Not only that, the visualization of a series that aired on TV Tokyo is arguably unique. Imagine you was reading a comic, but the picture moves. Such was the graphics are a mainstay of this SHIBAI YAMI. Although it looks rough and strange, but trust me, it seemed to be one of the horror element to add to his horror when watching.

One more thing that makes this movie more so the nightmare is its sound effects. Like most horror films, YAMI SHIBAI also emphasizes bgm or dark gothic berbagu soundtrack for chilling getting goosebumps. What about the story? Well, each episode of YAMI SHIBAI always show a different story. This series is designed to tell a variety of urban legend in Japan.

For those of you who claim to like horror, this movie is guaranteed fits really to spend leisure time. But be careful not to watch the nights alone ya! Check one of his episodes following.