✖
Home Bollywood Who is the King of Bollywood Shahrukh Khan or Aamir Khan?

Who is the King of Bollywood Shahrukh Khan or Aamir Khan?


Please Share this article is useful !
It feels so far no one has been able to beat the popularity of Shahrukh Khan and Aamir Khan in Bollywood. Almost all the films they get very good results and get in the top box office. 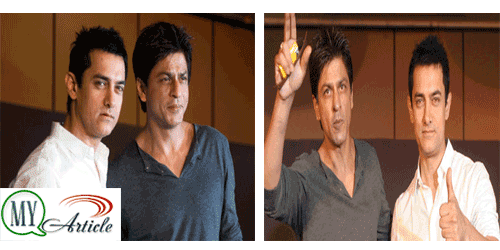 Not only get a great income from home, two big stars were also successfully earned revenues of hundreds of billions of dollars from abroad. And when compared to all the films in Bollywood, films starring Shahrukh and Aamir is the champion.

As reported by the Indian Express, the film Aamir and Shahrukh get into the top 5 most revenue from overseas. Aamir became champion by placing three films, PK, Dhoom 3 and 3 IDIOTS in the first place.

Shahrukh followed in fourth and fifth with the film CHENNAI EXPRESS and HAPPY NEW YEAR. Everything is getting an unusually large influx of foreign markets.

This entry makes the competition between Shahrukh and Aamir Khan more exciting. Because of all this, Shahrukh who has always been a champion in film sales outside India. But this time he had to hand over the trophy to Aamir.

"The fight between Shahrukh and Aamir exciting now happening on the international scene. In addition to the effects of the stars, it is also about the film and the contents in it. Now it is okay to Aamir lead, but Shahrukh also still has a big influence," said Taran Adarsh, movie watchers India .