Please Share this article is useful !
Childhood is a period play exciting. But not so for Jalene Salinas. Reporting from metro.co.uk, four-year-old girl should spend periods of fun just lying helpless. The reason, a big fan of Taylor Swift's disease highly malignant brain cancer. 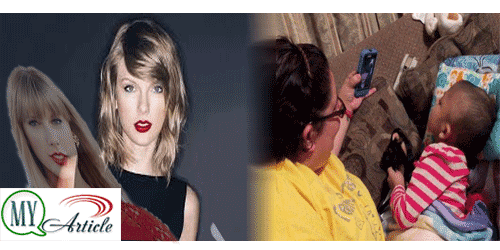 Taylor Swift, who is his idol, contact him via video call and say hello to the poor girl for approximately 20 minutes. He told Ms Arriagas, which is the mother of Jalene, that he really can not bear to see the child's age Jalene should suffer such a malignant disease.

Swift was shocked when Jalene said that he wanted to dance with him in a music video titled "Shake It Off". Jalene not say a lot of things on the singer Blank Space, just say "Goodbye and Terim love". In their conversation, Jalene was crying because it felt the pain in his head that makes Swift was crying.

Knowing this, the fans of Taylor Swift then create a campaign on Twitter to create a trending topic #ShakeItOffJalene. Proponents Jalene also has made him an account on Facebook with the title Jalene's Journey as a manifestation of their support for him a speedy recovery Jalene.

Mother Jalene feel very grateful to Taylor Swift for having made her smile even if only briefly. He saw his son was so happy to receive a video call from his idol. Jalene tells his mother that Taylor Swift is very beautiful. Hopefully Jalene given fortitude and immediately given healing!