Please Share this article is useful !
In addition to one of the veteran actor Indonesia, Ray Sahetapy, Marvel also invited actor Bilbo Baggins in The Hobbit to join the third sequel Captain America, CAPTAIN AMERICA: CIVIL WAR. Based on the press release quoted by Cinema Blend Marvel, they officially enter the name of Martin Freeman cast into the ranks of this film. 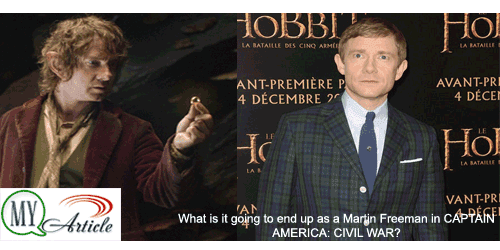 President of Marvel Studios, Kevin Feige even openly praised Martin. Marvel very fortunate and honored to be working with this cast of Bilbo. Unfortunately, the release of those not mentioned what character will be played by Martin.

According to Cinema Blend analysis, Martin will likely end up as a supporter which usually falls on the character of politicians or officials. Tommy Lee Jones and Robert Redford are two great actors who have similar roles when invited to star in CAPTAIN AMERICA: THE WINTER SOLDIER.

One source said that if the Cinema Blend Martin likely will portray Henry Peter Gyrich, one government official close to the Avengers and became a member of the Commission on Superhuman Activities. Until now, his role remains a mystery.

Cinema Blend guess even further. They imagine what would happen if Martin portray the figure of Norman Osborn. Norman was known as the leader of Thunderbolts, a group of criminals whose task was to 'secure' the superhero who does not register his powers to the government.

Actually, not just Martin Freeman just that his role is still kept secret. Ray Sahetapy even up to now still keep the meetings what character will be portraying. So do not wait to wait next year.