Please Share this article is useful !
Just remove REBEL HEART album, now Madonna will play the tour to promote their releases. Proper preparation has for this tour.

The tour will begin on September 9. A video teaser has been officially released and showed the proper preparation of the Queen of Pop and the team. 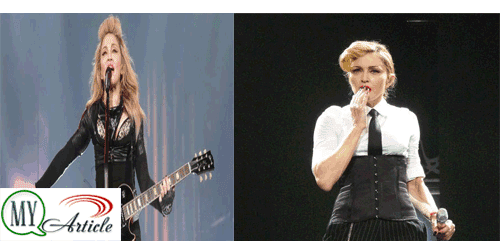 Actions magnifico stage, choreography out of the box and distinctive personality of Madonna's costume appears in this teaser video. In addition to express all the heart and desire, Madonna certainly want to get more appreciation from the audience concert later.

At his appearance, Madonna is often display things that is not standard. All the concept out of the box and unthinkable. Like the present to dance pole dance in the stage and also some artistic stage act contained in the video.

On the other hand, the album was answering a question until when Madonna will live a career in the music world. Still not enough? Madonna has also been voiced loudly will continue a career in the industry that made his name.

"I like to compare myself with other artists such as Picasso. He kept painting and painting until the end of its life. Why? I think he is also inspired by the same things as me. The life inspired him, so he wanted to keep mengeskpresikan what he feels. I do not think there is a time limit to be creative, "he told Billboard recently.