Please Share this article is useful !
WhatsApp is now known as one of the most popular instant messaging applications widely used in the world.  Founder of WhatsApp namely Jan Koum along with Brian Acton.  But did you know WhatsApp tucked behind the success of an inspiring story that is full of struggle from one of the founders Jan Koum.  This time biografiku.com will review the biography of Jan Koum known as the founder of WhatsApp.  Jan Koum was born on the 24th of February 1976 in the area called Fastiv part of Kiev, Ukraine.

Jan Koum father worked as a construction manager and his mother just a housewife.  Jan Koum comes from a family of Jewish descent.  Area of ​​residence Jan Koum very apprehensive because of all the facilities are very limited, such as electricity. Even for bathing all they have to queue up at public baths.

Living in a country whose politics are often volatile is not an easy thing for Jan Koum moreover, they are citizens of Jewish descent so they are often cautious.  Because of the increasing political turmoil and rising anti-Jewish movement in Ukraine, then in order to avoid this, Jan Koum family decided to move to the United States in 1990. They moved when Jan Koum 16 years old and live in the Mountain View, United States. 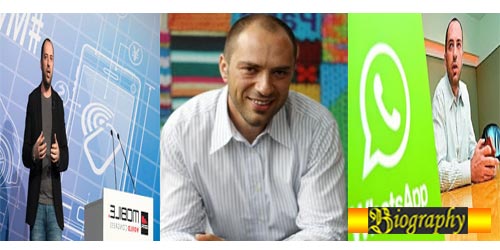 He lived there with his mother and grandmother, his father was still in Ukraine, and will follow them. Unfortunately, father Jan Koum died in 1997 while still in Ukraine.  Koum and his father rarely communicate by telephone because they avoid interception by the Ukrainian government.

Jan Koum with his mother and then struggled to survive in America.  Mother Jan Koum then try to work as a nanny and helped her mother with the Koum be sweeper stores to meet their needs.  Even so they are still shortcomings.

Because of the poor life of Jan Koum when it, he ate with relying on free food rations from the government for the homeless or vagrant.  He also sometimes sleeping in public places only paved ground and open to the sky.  All kinds of work he tried a new lakoni when he first moved to America just to connect his life alone.  The bitterness of life he had felt at the time.

Currently Jan Koum moved to the United States, he was proficient in the English language so he then easy to go to school in America.  In school he was known as a naughty child because it is very difficult to adjust and serng got into a fight, despite that he was a disciple of intelligent and very like computer programming he learned autodidact of used books.

He learned about the self-taught computer networks and even join the grub hacker known as w00w00 when at school.  Graduated from school, he then continued his education with the entrance at San Jose University.  To meet the needs of living and tuition fees, Jan Koum later worked as a tester of computer security systems at Ernst & Young.

Accepted Working At Yahoo
In 1997, he met with Brian Acton, a Yahoo employee who later became a close friend.  Armed with knowledge about computers fairly learned autodidact, Jan Koum then try to apply for a job at Yahoo on the advice of Brian Acton and he later accepted.

But in 2000, the trials of life experienced by Jan Koum when his mother died of cancer suffered.  In the living parents, Jan Koum then lived with his grandmother.  Together with Brian Acton, Jan Koum Yahoo witnessed the ups and downs, he worked there as a programmer and project handling advertising on Yahoo.

When working at Yahoo, Jan Koum also when the college.  But he decided to drop out or quit college and focus to work after being scolded by the CEO of Yahoo when it is David Filo.  Seven years working at Yahoo then make Jan Koum with Brian Acton decided to resign in 2007 from Yahoo.  After that they then spend time with vacation and traveled in the area of ​​South America for a year.

Rapid development WhatsApp
The initial version of WhatsApp only as an update on the status of your phone contacts on the Iphone. Then Jan Koum WhatsApp released v2.0 which comes with instant messaging features are then able to increase the number of users of the application to 250 thousand users.  Rival WhatsApp application when it is merely Blackberry Messenger (BBM) alone, but saw only limited use of fuel in Blackberry phones only, Jan Koum continue expanding its application.

WhatsApp then continue to be developed by Jan Koum successfully launched a feature to send photos in 2009 on the Iphone but that he also released WhatsApp for other devices such as Android and Blackberry.

WhatsApp then converted into a paid application in 2010 and they managed to obtain an income of 5000 dollars in the first month. It then makes a lot of other investors come to invest in WhatsApp like Sequoia Capital who inject funds amounting to 8 million dollars.

Applications WhatsApp
Entering the year 2011, WhatsApp artificial Jan Koum made it into the top 20 popular applications in the App Store Sequoia Capital da once again re-inject funds amounting to 50 million dollars to create value WhatsApp WhatsApp and soar to 1.5 billion dollars.  This then makes the company Facebook seduce Jan Koum to sell WhatsApp, but rejected by Jan Koum.  Continues to grow later in 2013, WhatsApp managed to have about 200 million active users.

WhatsApp was bought by Facebook and Jan Koum Being New Rich
Google and Facebook then scramble to acquire WhatsApp very it is growing rapidly.  Until then in 2013, Jan Koum with Brian Acton agreed to sell WhatsApp to Facebook with a value of 19 Millar Dollar. Making both of them as the new rich thanks to their struggle to develop the application WhatsApp. Jan Koum itself after the application was acquired by Facebook, wealth soared by 6.8 billion dollars, or about 80 trillion rupiah, and in 2015 and his fortune increased by 7.9 billion dollars, or about 109 trillion rupiah, according to Forbes magazine.