When entering school age, parents and local teachers see great potential in these children, the willingness to learn it made Louis Braille was allowed to attend classes along with other normal children. But it turns out, Louis Braille can follow the lesson well when Louis Braille only rely on their hearing senses. Maybe that's what makes Louis Braille at the age of 10 years received a scholarship to study at the Royal Institution for Blind Youth in Paris. 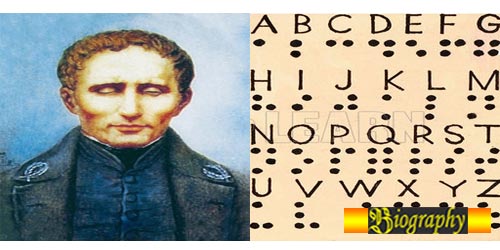 Royal Institution for Blind Youth is a special educational institutions for children with visual impairment. There Lous learning to read the letters embossed on the hardware in a way to feel him. In this school also provided some books with embossed system. These books contain letters that are large. At school had only 14 books like this. Because of his size was large, very expensive.

Louis Braille managed to read all the books in the library. Louis Braille embossing can feel it but said this very time-consuming to understand every sentence. And think there must be easier ways so that the blind can read quickly and easily as one can see.

In 1821, a French armed lift captain, Charles Barbier, visited the school to Louis Braille. Charles Barbier showed his invention called Night Writing. This code aims to allow its troops to share secret information on the battlefield without the need to talk or turn on a flashlight to read. This code consists of 12 points arise which can be combined to represent the letters and can be felt by the fingertips. But the code is very difficult and too complicated for most troops to be rejected for official use in his unit. But not for Louis Braille. Louis Braille think this code would be very useful if Louis Braille capable and successful simplify. And Louis Braille began seriously to produce dots of different signage. And just three years when Louis Braille at the age of 15 years, Louis Braille managed to build an ideal system that is now known as Braille, using a 6 point raised and based normal spelling. Each Braille character or cell is composed of six dot positions are arranged two columns so each had 3 points position so that rectangular. One or more points may result in one or more of the six positions that point to represent letters of the alphabet, punctuation, or specific numbers. And Louis Braille embossed continue to develop this, and with the passage of time Louis Braille managed to add symbols for math and music.

Louis Braille has created the Method of Writing Words, Music and Plain Song by Means of Dots, for Use by the Blind and Arranged by Them, first braille book ever published in the world. In the end, after developing and creating Braille books, Louis Braille became a teacher at the place he used to be a pupil. But at the appointed time, Louis Braille did not get to see his work used widely throughout the world. Because in 1852 died from tuberculosis he suffered.