Please Share this article is useful !
Michael Faraday was a scientist who came from England. He is the most influential scientists in history because he contributed in the fields of electromagnetism and electrochemistry. Electromagnetic induction, diamagnetism and electrolysis are the result of a discovery that is very useful for human civilization.

Michael Faraday was born on September 22, 1971 in Newington, Surrey, England. He was the third daughter of four children of the couple James and Margaret Faraday. He came from a poor family, his father was only a blacksmith.

Faraday received only the basics education, learn to read at once write, and cipher in a church Sunday school. At the age of 14, he was delivering newspapers and bookbinders in George Riebau, a bookbinding and bookseller in Blandford Street. Not only work, he took advantage of the activities to read some books. At that time he also developed an interest in science, especially in electricity. He lured the two books, namely The Encyclopedia Britannica burning electricity source in knowledge and book Conversations on Chemistry by Jane Marcet. 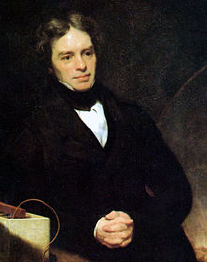 In 1812, when the age of 20 years. Faraday attended a talk given by the English chemist named Sir Humphry Davy at the Royal Institution of Great Britain in London. He recorded lectures discussed by Davvy in his notebook.

With such records Faraday dream to enter the world of science will soon be realized. He sent salilan of the notes that will be sent to Davy along with a letter to ask for a job.

After seven months of work at the Royal Institution, Davy Faraday invited on a tour of Europe that lasted for 18 months. He met with great scientists like Andre-Marie Ampere and Alessandro Volta. Faraday took a lot of benefits from the trip.

Back to London, the Royal Institution Faraday extend the contract and increase his salary. Faraday published his first academic paper, in the paper, he discusses the analysis of calcium hydroxide in the Quarterly Journal of Science.

In 1833, Faraday becomes Fullerian Professor of Chemistry at the Royal Institution of Great Britain he held this position until the rest of his life. In 1848 and 1858 he was offered to become the Presidency of the Royal Society, but the offer was rejected by Faraday.

Electromagnetic Rotation (1821)
This discovery eventually evolved into the electric motor, based on Hans Christian Oersted discovery that a wire carrying an electric current has magnetic properties.

Gas Search and Refrigeration (1823)
In 1802, John Dalton has stated that all of the gas can be liquefied by using a low temperature and high pressure. Faraday provide evidence of statements by Dalton by applying pressure to dilute the chlorine gas and ammonia gas.

Faraday observed that each of the ammonia evaporated was caused by cooling. The principle of evaporative cooling has been demonstrated by William Cullen at Edinburgh in 1756. Cullen used a pump to reduce the pressure on a flask of ether causes the ether to evaporate quickly.

Faraday importance of the discovery is that it has shown that mechanical pumps can transform the gas into a liquid. Fluid can then evaporate, cooling the surrounding area and the resulting gas can be collected and converted into liquid again by the pump, then the cycle can be repeated. This is the basis of how a refrigerator works.

Benzene (1825)
Benzene is an important substance that is in chemistry. Michael Faraday discovered benzene in the oil residue left over from the production process gas used for lighting in London.

Electromagnetic Induction (1831)
This is the most important discoveries for life in the future. Faraday discovered that a magnetic field is varied causes electricity to flow in a circuit.

Prior to this discovery, the only able to produce an electric current to the battery, but Faraday has shown that the movement can be transformed into electricity or in scientific can be explained as the kinetic energy can be converted into electrical energy.

The existence of the present invention, there is electricity in our homes today are manufactured using the principle of Faraday. The kinetic energy is converted into electricity using electromagnetic induction.

Electrolysis Faraday's Law (1834)
Electrolysis is a new science of electrochemistry. This science hang of what happens at the interface of the electrode with ionic substances. Electrochemistry is a branch of chemistry of the process of change chemical energy into electrical energy and vice versa, as well as its use. This law is very helpful in the electrode reaction.

Faraday Effect (1845)
Faraday discovered that the plane of polarization of linearly polarized light can be rotated by the application of an external magnetic field parallel to the direction in which light moves.

This discovery connects electromagnetism and light. Everything is explained by equations clerk James Maxwell in 1864, which stipulates that light is an electromagnetic wave. Michael Faraday discovered that a magnetic field causes the plane of polarization of the light to rotate.

Diamagnetism (1845)
Faraday found that all substances are diamagnetic mostly weak that only a few are strong. Diamagnetism opposing direction of the applied magnetic field. For example, if you hold close to the magnetic north pole diamagnetic substances, these substances will be driven away by a magnet.

Die
Michael Faraday was born on September 22, 1971 and died on August 25, 1867. In his marriage to Sarah, he has no children. During his life, he has offered to be buried in Wstminster Abey along with kings and queens of England and scientist Isaac Newton. But he refused, he asked be buried where his wife is buried. Faraday was buried in Highgate Cemetery.