Please Share this article is useful !
Sophisticated, Ultra Futuristic Self Driving and leader in automotive technology brings. The slogan is written in celebration of the 100th anniversary of BMW in Munich, Germany. 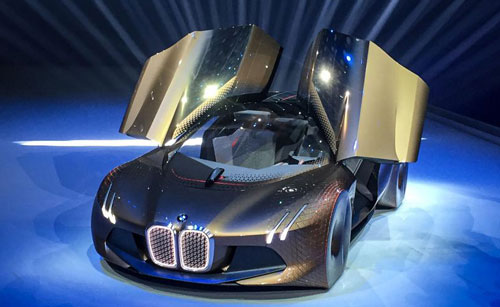 On the occasion of the show, too, Car Manufacturers from Germany are introducing the concept of the BMW car for Vision Next 100 as vehicles of the future, which is not only made ​​of body super flexible 3-D, but is also supported by the latest technological features such as autonomous driving (auto pilot) where the car can run themselves, aka do drive without a driver. 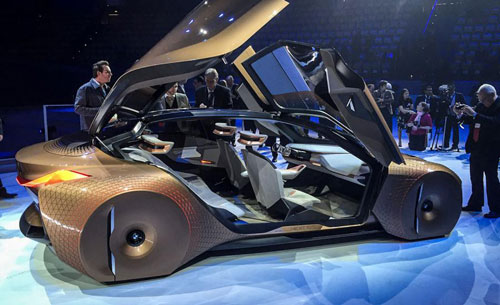 There are two types of variation car of the future "BMW Vision Next 100" are offered, namely the selection of Boost to manually control the car and the choice of Ease to experience the sensation of 'Self' of BMW without having to control his steering wheel.

With a panel of the computer located in the middle of the dashboard, the driver stayed arrange travel destinations. Furthermore, it can be left to sleep or talk with the passenger next to him. And the steering wheel of a car that resembles the aircraft will be automatically entered into dasbos where the driver sits. In addition, the front and rear doors are also using the B-pillar that could open in the opposite direction. Cool is not it?

But really the most special of 100 BMW Vision Next is a body design that is super flexible three dimensions made of carbon mixed with plastic, can be curved and curves of flexure ranging from bumpers, the side door of the car, the wheels of the tires until the iron frame.

When in use runs did not look toward the tire is moving where, turn or not. Advanced, but unfortunately the latest BMW car sales market next vision of this new 100 planned in some countries such as the US, UK and China, and even then in the year 2017 and the sales price is quite expensive.