Regarding biographies, profiles of Sutan Sjahrir himself, he was born on March 5, 1909 in the city long meadow, West Sumatra. He has a sister named Rohana Kudus. His father was Mohammad Rasad title of Maharaja Soetan bin Leman Soetan Soetan degree Palindih and his mother named Puti Siti Rabiah derived from Tower Koto, Agam, West Sumatra.

Parents Sutan Sjahrir is a highly respected people in Sumatra. His father served as an adviser to the Sultan of Deli dannjuga chief prosecutor or landraad in the Dutch colonial administration. Having been born in a family that affluent economic conditions, Sutan Sjahrir entered at the best school in the days when the Dutch kolonal. He began his education at ELS (Europeesche Lagere School) or elementary school. 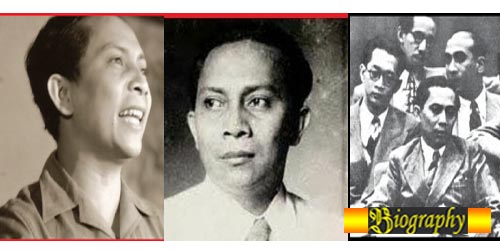 After completing education at ELS, he then entered in MULO (Meer Uitgebreid Lager Onderwijs) equivalent to a junior high school or junior high. Here he later read a lot of foreign books published by the European and literary works from the outside. Graduated from MULO in 1926, he then moved to Bandung and attended the AMS (the General Middelbare School) which is the most expensive and the best schools in Bandung.

Starting Falls to the World Organization
At AMS, he became the best student there, Sutan Sjahrir spending more time reading books from Europe and also follow the art club at school. He was also active in the debate club at AMS. In addition, he also founded a school named Tjahja Volksuniversiteit (Light of the People's University) intended for children illiterate and from poor families.

His experience in the organization at the school took her plunge into the world of politics at the time. Sutan Sjahrir became known as the pioneer in the establishment Jong Indonesie (nationalist youth set) on 20 February 1927 which later changed its name to Pemuda Indonesia. Pemuda Indonesia then drives the commencement of the Indonesian Youth Congress which gave birth to the Youth Pledge on 1928.

As a student at the time, Sutan Sjahrir often being chased by Dutch police in Bandung because often read news about the PKI rebellion in 1926 when it was forbidden to read for school students. Sutan Syajrir is also the editor in chief of the National Youth Association which often deal with the Bandung police because they often criticized the colonial administration at the time.

There also he then get to know the Salomon Tas who is Chairman of the Social Democratic Student Club, and also a woman named Maria Duchateau who later became his wife, whom he married in 1932. In the Netherlands too, Sutan Sjahrir joined the Association of Indonesia (PI) led by Mohammad Hatta .

Fearing movement youth movement organizations Indonesia, then the Dutch government to strictly supervise even perform actions such raids imprison movement leaders such as Ir. Soekarno until then PNI (Indonesian National Party) activists PNI itself. Together with Mohammad Hatta, Sutan Sjahrir always call for a movement towards the independence of Indonesia. They poured their writing through Sovereign People magazine owned by the National Education of Indonesia.

Seeing the declining spirit of the movement in Indonesia as a result of the Dutch colonial government supervision, intense Sutan Sjahrir in 1931 chose to quit college and then returned to Indonesia to continue the national movement towards independence Indonesia.

His experience in the organization while still a student and also when studying in the Netherlands makes it immediately joined the Indonesian National Party (PNI), which diketuainya on tahn 1932. As a figure who had socialist views, Sutan Sjahrir also incorporated in the labor movement. Sjahrir's writings on labor kia pour in Daulat magazine People often talk about labor-frum political forum so make Sutan Sjahrir in fortune as chairman of the Congress of Indonesian Workers.

Leading New PNI Party Joint Bung Hatta
The return Hatta to Indonesia after the Dutch and led the New PNI together Sutan Sjahrir make New PNI tend to be more radical than the PNI when still under the leadership of Sukarno. This then makes the Dutch colonial government more closely monitor the activities of the new PNI is chaired by Mohammad Hatta and Sjahrir.

The movement of PNI Baru under the command of Hatta and Sutan Sjahrir which tends increasingly radicalized by the mass mobilization of massive make Sutan Sjahrir and Mohammad Hatta end arrested by the Dutch colonial government and imprisoned, then they were both exiled in Boven-Digoel and then discharged for six years in Banda Neira Banda Islands.

At the time of the Japanese population, Sutan Sjahrir movement 'underground' to build a network to prepare for independence without cooperating with Japan as it is conducted by Ir. Sukarno. Syahrir believe that the population of Japan is no longer, and Japan can not win the war against the allies so that Indonesia should quickly win independence from Japanese hands.

Sutan Sjahrir then urged Sukarno and Mohammad Hatta to declare Indonesian independence on 15 August 1945, this pressure is also supported by the youth at the time. But Sukarno and Hatta refused and kept in accordance with the plan which is dated 24 September 1945 set by PPKI (Indonesian Independence Preparatory Committee) set up by the Japanese.

It then invited the disappointment of the youth of Indonesia moreover, Japan is known to have given up and lost the war by the allies. This is what makes young people when it kidnapped Sukarno and Mohammad Hatta and took him to Rengasdengklok on August 16, 1945 in order to keep the influence of Japan and urged to immediately proclaimed the independence of Indonesia.

Then on October 2, 1946, Sutan Sjahrir back into the Prime Minister who then resume negotiations Linggarjati famous 15 november 1946. Sutan Sjahrir known to fully recognize the President as a great leader of Indonesia, and many say that without the president Sukarno, Sutan Sjahrir nothing -Which one.

Diplomacy Indonesia expert at the International arena
Sutan Sjahrir also known as the chairman of BP KNIP (Working Body Central Indonesian National Committee), he is also a perangcang of the presidential cabinet changes into a parliamentary cabinet in Indonesia. As prime minister Sutan Sjahrir's cabinet reshuffle has done three times, namely cabinet Syahrir I, II and Sjahrir Sjahrir III. He is also known as a consistent leader in the fight for the sovereignty of Indonesia in the international arena through diplomatic channels.