Please Share this article is useful !
Alan Turing's name is inseparable historical development of computer technology. He is known as a figure who played a major role in the development of modern digital computers first and is known as the 'Father of Computer Science'. His full name is Alan Mathison Turing was born in London on 23 June 1912. He was the second child of the couple Julius Mathison Turing and Ethel Sara Stoney. He has an older brother named John. F Turing.

Alan Turing the father Julius Mathison Turing worked as a civil service employee in India when India was still under British rule. His mother Ethel Sara Stoney which is a subsidiary of railway employees. When containing Alan Turing, the parents would that Alan Turing was born in England and therefore they later returned to England. 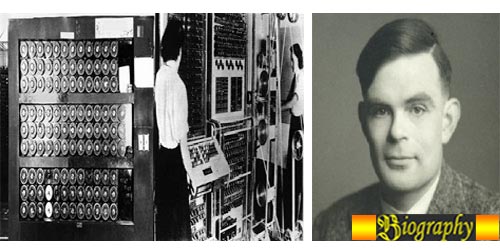 Childhood Alan Turing
When Alan Turing was six years old, he then entered the elementary school St. Michael, and at the school, began to show his genius Alan Turing and make principal marveled at the genius Alan Turing small. In his teens, he had a lot of reading the works of Albert Einstein and then began to put his interest in science and mathematics. And in 1926, Alan Turing then entered in Sherbone School. Graduated from Sherbone School, Alan Turing then continued his education by studying at Cambridge University in the Department of Mathematics in 1931 where he influenced the writing Von Neumann, Russell and Whitehead on mathematics and science and in college he was active in the peace movement.

In 1930, Alan Turing managed to create a machine called 'Turing Machine' or Turin Machine is a machine that can run a set of simple commands which later became the forerunner of the modern computer.)

Excerpted from the book The History of Psychology by George Boerre, artificial Turing machine is a device that is able to change and manipulate basic abstract symbols. The engine consists of a tape that can be used to read and write symbols on the tape of the Turing machine, and also can make the tape as a storage area. However, a Turing machine is not limited to the push and pop operation when accessing the storage media. Alan Turing also created concepts of computer science even when it is still not known.

In 1934, Alan Turing then graduated from Cambridge University and thanks to his intelligence and also his achievements, he then received a scholarship from Princeton University in the United States to pursue a degree doctor and managed to finish in 1936.

Creating a code-breaking machine 'Colossus' Ancestor of Digital Computers
Finished his education, Alan Turing then returned to England and worked at the Ministry of Communications United Kingdom. As World War II raged in 1939 and 1945, he was assigned to solve the information contained in the Enigma machine (encryption engine) made in Nazi Germany.

Did not take long, he then managed to break the codes contained in the Enigma machine by creating a code-breaking machine named 'Colossus'. The machine is then a prelude to the pioneer era of digital computers. Services are very large for the country to make it then was awarded as a war hero.

After the World War, Alan Turing then published a scientific paper entitled "Computing Machinery and Intelligence '. In his writing he proposed a method if a machine also has a 'artificial intelligence' like the human brain that then the proposal is known as the 'Turing Test'.

During his life, Alan Turing machine working hard to make his creation of the Turin Engineering can be automated computing machine at the National Physical Laboratory, but it never reached. He then moved to the University of Manchester and then there he produced a guide for automatic computer machines MADAM (Manchester Automatic Digital Machin e).