Please Share this article is useful !
Mysterious sea creature with a "beak" like birds and feathers that covered his whole body washed up on a beach in Russia.

The body of this huge monster found on the coastline of Sakhalin Island, a place closer to the United States rather than Moscow.

Some pictures of the site shows the Siberian Times hairy creature. Nikolay Kim, senior officials from the Research Institute of Marine Fisheries and Sakhalin, believing the creature as "a kind of giant dolphin." 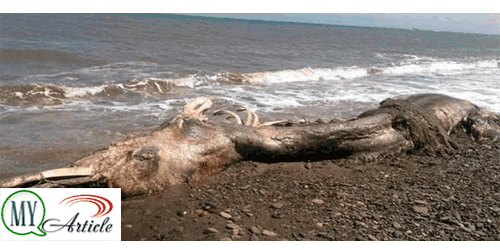 "Based on the characteristics of the skin, it is a rare species," said Kim, as quoted metrotvnews.com from Mirror.co.uk.


"I doubt these creatures living in our waters. Most likely, these animals carried the warm currents of the sea. Sometimes, there are tropical and subtropical species are stranded here and die, "he continued.

Although the creature believes it was a dolphin, Kim still can not explain where the feathers come from. "It's very unusual. Dolphins are not fluffy, "he explained.

Picture this creature sparked uproar in the Russian social media. One netizen said: "Like a giant sea monster mutant with a beak."

There are also some netizens expect as dolphins of the Ganges, which are found in India, Pakistan, Nepal and Bangladesh.

According to data from renowned marine park Sea World, dolphins born with short hairs, but in spite of itself shortly afterwards.