Please Share this article is useful !
What: Carambola is a fruit that has 5 points that cause it to look like a star when it is cut open. It has a waxy outer texture and juicy inside. It is a yellowish green color and has a flavor combination that includes the flavors of: plums, pineapples, green apples and lemons. They are sweet with undertones of tart and sour. The entire fruit can be consumed, including the outer skin (like a grape). 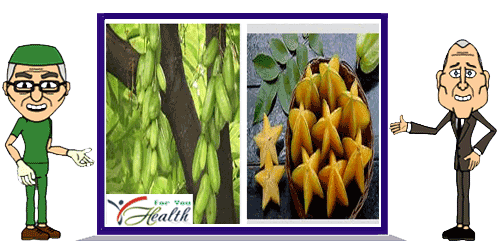 Where: The fruit grows on a tree called the Averrhoa carambola, and is native to the Philippines, Indonesia, Malaysia, India, Bangladesh and Sri Lanka. It is also grown in Costa Rica, Peru, Colombia, Jamaica, Trinidad, Ecuador, Guyana, Dominican Republic, Puerto Rico, Haiti and Brazil, and, in the United States, in south Florida and Hawaii.

How: Storage- at room temperature for two to three days, or unwashed and refrigerated in a plastic bag for up to a week.

Growing- It prefers full sun exposure, but requires enough humidity and a total of 70 inches or more of rainfall a year. It does not have a soil preference, but it requires sufficient drainage. The fruit is mainly harvested during June, July, and August, but it is sometimes harvested year-round as well.

Why: Carambola is rich in antioxidants and vitamin C and it is low in sugar, sodium and acid. It is also a great source of both primary and secondary polyphenolic antioxidants.

Why (continued):
Fun things to do with Starfruit, aside from eating it, you can cut up the fruit in half or into slices, dip them in paint, and use them as a stamps. It is a unique, exotic fruit that has many mythical associations attached to it such as it’s health benefits, and spirituality. In ancient Javanese‐Buddhism wisdom, the five points of the fruit are were often translated as the five taboo deeds – no smoking of opium, no drinking, no gambling, no theft, and no adultery. The fruit is thought to help fevers, bleeding, stomach pains, bladder pains and even hangovers. The roots of the tree, when mixed with sugar, are considered an antidote for a variety of poisons.