Please Share this article is useful !
Peptic ulcer is an injury to the mucosal lining of the duodenum (the upper part of the small intestine) or the stomach. Duodenal ulcers are more common than gastric ulcers. Relatively rare is the ulcer of the esophagus, which is formed in the esophagus and is often the result of exposure to drugs, such as antibiotics or certain anti-inflammatory, and alcohol abuse. There is no clear evidence showing that stress in modern life or eating fast food causes ulcers / ulcer in the stomach and small intestine, but this condition is quite common in our society: About one out of every 10 people will suffer from the symptoms of burning sensation in the stomach or gastric (or stomach) because of an ulcer. 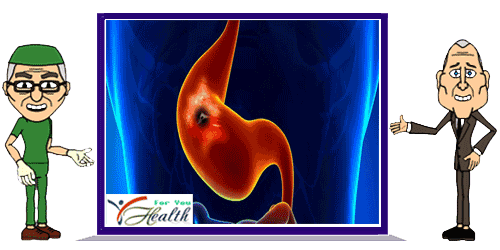 Until the mid-1980s, the conventional wisdom was that the peptic ulcer is formed as a result of stress, genetic predisposition to excessive gastric acid secretion, and poor lifestyle habits (including fatty foods, alcohol, caffeine, and tobacco is excessive). This theory believes that these effects contribute to the buildup of stomach acids that erode the mucosal lining of the stomach, duodenum, or esophagus.

Causes and Relation to Blood
While excessive stomach acid secretion certainly play a role in the development of ulcers, a relatively new theory states that the bacterial infection is a major cause of stomach ulcers. Indeed, studies conducted since the mid-1980s have shown that the bacterium Helicobacter pylori (H. pylori) is present in more than 90% of duodenal ulcers and about 80% of gastric ulcers. However, newer figures show a lower percentage.

Other factors also seem to contribute to ulcer formation. Overuse of painkillers are sold freely in shops or can be bought without a prescription (such as aspirin, ibuprofen, mefenamic acid, sodium diclofenac and naproxen), heavy alcohol use, psychological stress, and smoking can worsen and may aggravate ulcers, especially to someone with bacterial infection H. pylori.

Another study showed that peptic ulcer is more likely to occur in older people. This may be due to arthritis (joint inflammation and pain) prevalent in older people, and to reduce the pain, parents can consume a certain amount of pain relievers such as ibuprofen or diclofenac sodium. Another factor may be that with age, the pylorus (the valve between the stomach and duodoneum) more relaxed and allow the excess bile (a substance produced in the liver to aid digestion) penetrate into the stomach and erode the mucous lining of the stomach.

Treatment
Fortunately, peptic ulcers are relatively easy to treat; in many cases they are cured with antibiotics, antacids, and other drugs that reduce the amount of acid produced by the stomach. There are also a variety of independent and alternative medicine treatments that can help in relieving pain. However, the hazards associated with peptic ulcers - such as anemia, bleeding stomach, and gastric cancer, is a serious problem, so that peptic ulcer should always be monitored by your doctor.