How to Make Healthier Fried Rice


Please Share this article is useful !
N ation fried popularity has been proven in various parts of the world, especially in Asia. The delicacy of this dish is supported by a variety of herbs and supplements, such as eggs, pickles, crackers, vegetables, sauce, and meat. In Indonesia, Malaysia, and Singapore, fried rice has a taste of its own thanks to the blend of soy sauce.

Although preferred, fried rice is often regarded as a source of high cholesterol because the content of the menu is rich in carbohydrates processed by frying. In fact, if the processing and materials chosen with slick, this dish can be a healthier dish. The following may be some suggested ways and materials to create a more healthy fried rice: 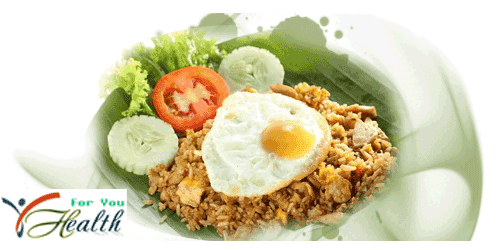 Use rice that has been cooked the night before
Take advantage of leftover rice or rice cooked on the previous day in order to be more savory fried rice. Freshly cooked rice will make dishes become mushy. So also with rice stored in the refrigerator will eventually clot. You can separate them before cooking.

Choose the right oil
Use nonstick frying pan so that you do not need to use too much oil. Prioritizing use new oil for frying. Avoid using oil that has been used to avoid repeated heating. Reheating will make unsaturated fats into saturated fats. The best oils used for frying is that it contains monounsaturated or double, such as vegetable oil or olive oil . Beneficial both to reduce the risk of heart disease .

Avoid heating the oil in the frying pan until the oil smoke. Besides going to make a dish forfeited and no favors, oil is heated at too high a temperature will lose their nutritional value. Olive oil has a low thermal point so that if heated long there will be smoke. Other oils, such as sesame oil or corn oil can also be used. While palm oil and coconut oil should be avoided because it is rich in saturated fat, although it does not contain cholesterol.

Avoid using margarine or butter instead of oil for sauteing. Butter is high in saturated fat so that the risk of increasing cholesterol levels and the risk of heart disease. Similarly, margarine containing trans fatty acids and less saturated fat.

Choosing fresh ingredients and healthier
Heat the oil until hot half. Pour the rice and stir-fry until mixed evenly with seasoning. Add vegetables, such as carrot slices, if desired, and stir-fry until savory. Limit the use of herbs that are high in sodium, such as teriyaki sauce or soy sauce.

Avoid fried rice seasoning also use ready-made packaging. This material usually contains too much salt and preservatives. It was also not necessarily according to taste. Instead, try using fresh ingredients such as onion, garlic, and chili.

As much as possible to mix as much rice with vegetables, compared with processed meats, such as sausages or bacon. In addition to generally contain high levels of salt and preservatives, processed meat products may increase the risk of colon cancer.

If you use chicken as a complement, select the chest compared thigh because it contains less fat. Discard the skin. If using eggs, use egg whites only. Egg yolks contain calories three times higher than whites.

So that the eggs do not burn as incorporated earlier, enter the egg after half-cooked rice. Make a hole in the middle of the rice that was cooked to put it aside to the edges of the pan. Break the egg and place it in the hole. After stirring the eggs, mix the eggs together with the rice. Finally, you can add sesame oil and chives to taste as tastes.  Here is a guide to ingredients and nutrients that can become a reference in one serving of fried rice.
In the dish with the ingredients above, at least contained 300 calories and the amount of nutrients is worth approximately as follows: 6 grams of protein, 15 grams fat, 53 mg cholesterol, 36 grams carbohydrates, 3 grams fiber, 10 grams of saturated fat, 3 grams of saturated fat, 498 mg sodium.

There is a wide variety of fried rice that can be made according seasoning and alloys. In Indonesia alone, there are so many healthy ingredients that can be used as alloys, such as banana, melon, mushrooms, sardines, and shrimp paste. Be creative with the ways of processing and materials can make their own choice of fried rice dish as a healthy food alternative family.