Please Share this article is useful !
BIOGRAPHY
Julie Andrews was born on 1st October, 1935 in Walton on Thames, Surrey, England. She was brought up in humble surroundings. At a young age, her parents were divorced and she was brought up by her father, her mother (Barbara) and step father, Ted Andrews.

One of her earliest memories is living through the blitz, sheltering in air raid shelter’s. It is said that during the air raids, Ted Andrews, would often start singing, Julie would also join in singing a full octave above everyone else. This was the first time her beautiful singing voice was noticed, and her parents took care to nurture and improve her voice in her childhood years. 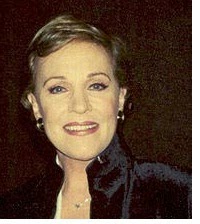 Julie Andrews first experiences of performing came in 1945, at the age of only 10. She was invited to join her mother and “pop” (her step father Ted) on stage. She remembers how she had to step on to a crate to reach the microphone.

Her first big single performance came on 22 October 1947, when she performed at the London Hippodrome. She performed the testing “Je Suis Titania” aria from Mignon. This difficult piece was from part of a musical revue called “Starlight Roof”.

From this point her progress was swift; in the next year, aged only 13, Julie Andrews, became the youngest person to perform in a Royal Command Variety Performance. Between 1950-52, Julie Andrews made her break into the fledgling TV programs, gaining national prominence through her appearances in the show “Educating Archie”.

CAREER
Her international career really took off with her performance in the musical “My Fair Lady”. The musical is based on George Bernard Shaw’s play, Pygmalion. My Fair Lady, tells the story of a poor, uneducated London girl from the east end, who is taught to speak like a lady. Given Julie Andrews humble beginnings, there is some parallel with her rapidly blossoming career.

Julie Andrews was the undoubted star of the musical and she helped make it one of the smash hits of the year. During her performances in my fair lady, she was asked to perform in the 1954 film production of Cinderella. However, When My Fair Lady was made into a movie, Julie Andrews was passed over for the much better known Audrey Hepburn. Ironically, shortly after this disappointment she was given the opportunity to perform in the Walt Disney film “Mary Poppins”. This was received with great critical acclaim and has remained one of the most treasured films of all time. For her performances, Julie Andrews was awarded the 1964 Academy award for best actress. In 1965, she was also awarded a Golden Globe.

In the next year, Julie Andrews played Marie von Trapp, in the classic film production of The Sound of Music. By many accounts, the Sound of Music has been the most successful film of all time, and Julie Andrew’s performance is a defining feature of the film. She was nominated for another academy award, but lost out to Julie Christie Darling as “Diana Scott”