Please Share this article is useful !
His age is still very young, but even so the name Yasa Singgih has been included in the list in Forbes magazine as a youth under the age of 30 who gave a change in the world of retail and e-commerce. But behind his success, Yasa Singgih had to experience the ups and downs of building his business.  The young man born in Bekasi on 23 April 1995 was born from a simple family. Both parents work in the office.

The youngest of three siblings Marga Singgih and Wanty Sumarta spends much of their time playing at school. He finished his elementary school in Ananda Elementary School. However, when he was in junior high school Surya Dharma, his father had a heart attack so he had to do ring operation.

Surely the operation requires a lot of money. His father then refused to perform surgery, preferring to use his medical money to pay for his children's education including Yasa Singgih.

The incident made Yasa Singgih start thinking to earn his own income. Capitalized desperate he finally tried to apply to a host or MC (Master of Ceremony) either at birthdays or other events. At that age he was 15 years old but in a day, he was able to perform at 3 different events with honorarium to reach 350 thousand every time the event. 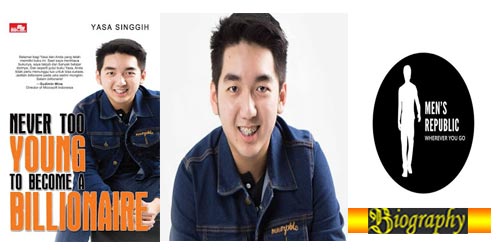 When the high school period in Regina Pacis, Yasa Singgih more active to do business. After becoming an MC or an emcee, he began trying to do the decorative lighting business that he lived for six months. Without enough experience, Yas then desperate to do business t-shirts. He contacted his friend who owns a convection business.

But at that time he did not have a design shirt. For a few days he continues to learn to make designs, but on because kepepet, Yasa finally desperate to make a design with a microsoft word clothes application. A reckless and funny experience. After the t-shirts that he ordered so, he finally tried to sell it, but from 24 shirts that he made only sold two shirts only where one of his shirts bought by his own mother.

Although his shirt is not sold, he does not kapok do business t-shirts. He then went to Tanah Abang market to search for T-shirts for sale. He bought dozens of T-shirts and brought them home.

Yasa then started selling dozens of his shirts without a good marketing strategy. Little by little his shirts began to sell a lot. He finally managed to cover the capital sales. After he finally started planning his business thoroughly.

After he had enough capital, Yasa started drinking by opening a stall which he called 'This Coffee Tea'. This business is growing rapidly even he dared to open a branch in the mall Ambasador but over time he lost even losses reaching up to one hundred million rupiah.

After that he stopped all his business activities to focus on the national exam. After graduating high school, Yasa Singgih again plunge into the business world. This time he focuses on selling various men's products. He chose the name Men's Republic as his brand name. For that, he worked with shoe factories in Bandung as a supplier of its products. This time his business strategy is accompanied by careful business planning.

The product he sells in the price range of 195 thousand to 390 thousand by targeting young people. It sells its products online. Despite not having a shoe-making factory, Yasa Singgih managed to sell his shoes up to 500 pairs of shoes per month with a turnover of hundreds of millions.

The success of his shoe business makes the name Yasa Singgih became known as one of the youngest entrepreneurs. In addition to shoe business, he also began to sell men's accessories such as bags, belts or pants. Brand Men's Republic began to be widely known in Indonesia.

Success at a young age makes the name Yasa Singgih included in the list of 30 young people in Asia under the age of 30 who gave a change in the world of retail and e-commerce. At the age of 20 years, he already has his own company with the name of PT Paramitha Singgih which houses the Men's Republic brand.