Cervical Cancer - Know the causes and symptoms of cervical cancer


Please Share this article is useful !
This disease is a classification of the most dangerous and most feared diseases, reasonable if so, because many lives have been lost because of malignancy of cervical cancer . Through the site beritasatu.com and cnnindonesia.com , explained that already 10.3% of deaths occur in Indonesia due to Cervical Cancer, therefore keep yourself, one of them by maintaining immunity. (Read: Understanding Ovarian Cancer)

For information on Cervical Cancer is very limited, it is because of the talk that leads to the "area" specific women who are considered inappropriate / taboo if too loaded to the public. 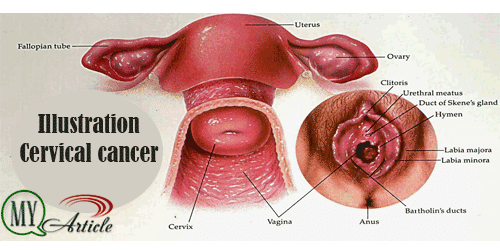 According to data from the World Health Organization (WHO) mentioned that Cervical Cancer has been ranked top of the list of cancer diseases that cause deaths in women around the world, this indicates if Cervical Cancer fall into the category of most dangerous diseases. (Read:  Definition of Throat Cancer)

Come acquaintance with Cervical Cancer!
Cervix in English (Cervix) means nape or neck. The cervix of the uterus means the cervix. Named the cervix because it looks like a neck. Through daily Kompas mentioned that Cervical Cancer disease is a disease that occurs in the cervical region located in the female reproductive organs as the entrance to the uterus and its location between the uterus (uterus) with the vagina. According to the Wikipedia site, cancer of the rahum is a cancer that is 99.7% caused by oncogenic human papilloma virus (HPV), which attacks the cervix.

This is the cause of Cervical Cancer!
Cervical Cancer infestation to women (men survived lho!) Caused by a virus called human papilloma virus (HPV). This virus is very fierce and always hungry, easy to move and contagious. How to spread HPV virus can through the liquid, skin touch, toilet use, public wc and others. Therefore, the use of condoms during intercourse is not very influential on prevention of HPV virus transmission.

If you can say, this disease includes 'cold-blooded killer', it happens due to a long period of time between 10-20 years of new Cervical Cancer reveal itself. As long as this cervical cancer disease is not painful, often women escape the attention, because the process of HPV infection that develops into pre-cancer generally takes place without any symptoms. (Read: Cancer Prevention Natural Ingredients)

Symptoms of Cervical Cancer - detection with "pap smear"
It must be admitted if detecting Cervical Cancer as early as possible is difficult, therefore for married women it is recommended to perform anticipatory action that is by doing a pap smear test every two years. Currently, pap smears are a highly recommended way to detect early Cervical Cancer disease.

Symptoms in Cervical Cancer if it is more obvious in the advanced stage can be known by the occurrence of bleeding during contact (bleeding), postcoital bleeding, excessive vaginal discharge, bleeding outside the menstrual cycle, drastic weight loss, enlargement of the kidneys and constipation big.


"The above is a symptom of Cervical Cancer that has entered the advanced stage, for precaution should check with a specialist in the field of cancer".

Prevent Cervical Cancer as early as possible
Based on a survey involving 5,423 women in Asia and conducted in 9 countries including Indonesia have shown only 2% of women who know the occurrence of HPV infection is the cause of this cancer. For that, it is necessary basic understanding of how to prevent Cervical Cancer as early as possible which needs to be improved. The basic precautions are:
^^ Very anticipatory if you take care and care for your body properly, so you will be protected from all kinds of diseases one of them Cervical Cancer . May be useful !