Please Share this article is useful !
Biography of Hoegeng~Police Most Honest In Indonesia-Hoegeng Imam Santoso is the eldest son of the couple Soekario kario Hatmodjo and Oemi Kalsoem. He was born on October 14, 1921 in Pekalongan. Despite coming from a family Priyayi (his father is an employee or amtenaar Dutch government), but the behavior of small Hoegeng show no arrogance, he even hung out with a lot of kids from the ordinary. Hoegeng had never questioned whether or not a person's nobility in the mix. Hoegeng childhood colored with simple life since Hoegeng father was homeless and private land, so he moved often rented house.
Small Hoegeng also educated in families that emphasized discipline in every way. Hoegeng received his primary education at the age of six in 1927 on Hollandsch Inlandsche School (HIS). Graduated from HIS in 1934, he entered the Meer Uitgebreid Lager Onderwijs (MULO), ie secondary education in Pekalongan. In 1937 after graduating MULO, he continued his education to the General Middlebare School (AMS) education at the high school in Yogyakarta. At the school at AMS, his talent in the field of language is very prominent. He is also known as a person who likes to talk and hang out with anyone without shy away by ignoring any race or nation. 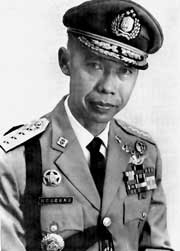