Please Share this article is useful !
Ebola is a type of virus that is deadly today. ebola virus lately a lot of attention of the world community. article ebola plague is plague the highest death rate in the history of WHO. Currently there has been no case of Ebola disease that occurred in Indonesia, but we must raise awareness of the virus this one. 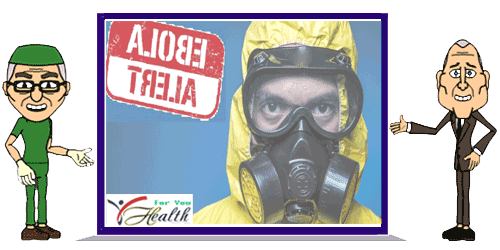 The experts concluded that these viruses have occurred since 1976 in the Congo. This virus is found in fruit bats that spread to other animals. This virus infects humans through the blood of animals hunted were cleared shortly after the hunt.

Causes of Ebola disease
Ebola disease caused by the Ebola virus that infect humans. Ebola virus is spread to humans through direct contact with the patient's blood or body fluids such as urine, feces, saliva and semen. Direct contact means that the blood and other fluids of the nose, eyes, mouth or wound someone. The incubation period of the Ebola virus is about two or three days to three weeks after infected by the virus. The condition can also cause liver and kidney function decline. Even lead to bleeding functions.

The spread of Ebola Virus
Ebola disease spread by the spread of the Ebola virus itself. The greatest impact is the ebola virus affected families who live with the patient or their care providers, including medical personnel. If you are a family member affected by the Ebola virus should be immediately taken to the doctor dna get help by medical personnel reliable. During the treated patients undergo rigorous monitoring and laboratory routine for transmission disease chek that it can be handled. Because as long as there is still blood and fluids the virus could still be alive.

Not only human beings, the environment ebola disease can also transmit the virus. Clothing, bedding, syringes can also transmit the virus. medical personnel who handle Ebola patients are particularly at risk to be exposed to this virus. ebola virus can survive in the skin of patients. So the funeral ebola patients should also be considered good either. Funeral preferably handled by a person skilled in order to avoid the further spread of this virus. The spread of diseases such as ebola not like the flu or chickenpox can spread through air circulation. But even so the Ebola virus can be transmitted in place public places such as airports, schools, offices and hospitals. Read also:

Signs and Symptoms of Ebola
Disease ebola virus will not be transmitted to undergo an incubation period of approximately 2 to 21 days. Ebola disease symptoms seen in patients who will transmit the disease ebola. Transmission will occur if the ebola disease symptoms appear. The initial symptoms were apparent for patients is the sudden fever, headache, banda felt weak, pain in muscles and joints, and sore throat. If these symptoms appear along with advanced symptoms of vomiting vomiting, rash, impaired kidney and liver function. Bleeding in the body that comes out through the mouth, ears, nose, eyes or ears, it must immediately get special care so that the virus does not spread. See also: Virus HPV main cause of cervical cancer

Ebola disease can not be detected from the initial state quickly because the symptoms suffered by patients is very similar to miningitis disease and malaria. Ebola virus detection will look when detected by laboratory results. Therefore, doctors will recommend to do a blood test or a test laboratory to test whether patients tested positive for Ebola. In addition it also conducted tests for the diagnosis of a blood virus sometimes only show low platelets, if the patient has been positive with ebola then immediately get special care. Patients suffering from Ebola could not receive continuous contact from the outside because it was feared would transmit the disease. other than that until today has not found drugs of this disease. therefore, care has to do is to keep the patient's immunity against the virus. Generally, patients only receive liquid food intravenously. So that when exposed to Ebola attacks the patient should really be kept in conditions of maximum.

Ebola Virus Prevention
Ebola disease prevention is preventive action that must be done by anyone. Find out as much as possible about the disease ebola to understand if there are infected with the virus, wash hands thoroughly after visiting a patient at the hospital, the patient should really be handled by a medical team that has experts so as not many victims were infected.

In addition to preventing disease ebola especially for medics is to use a complete security when taking care of patients suffering from Ebola virus. Avoid traveling to areas that have been infected with this virus, including in West Africa, if traveling to the tourist park should maintain the cleanliness of animals sata touching animals such as monkeys or bats. If cooking the meat should be cooked until done.