Please Share this article is useful !
He is known as the inventor Laptop. Adam Osborne is one of the important and influential role in the early history of the manufacture of personal computers (PC) and make the first portable computer that is now known as Laptop. He was born in Thailand in 1939, and spent his childhood in Tamil Nadu, South India, with his parents are British. He moved to England at the age of 11 years. In 1961 he graduated from the University of Birmingham, England, as a young scholar in the field of chemical engineering. After that, he moved to the United States and graduated from the University of Delaware and earned a doctorate in chemical engineering. Later, he worked in a mining company Shell Oil.

Adam Osborne life
Like most people who always think creatively, Osborne felt uncomfortable in living life as an employee in a big corporation. He does not like to linger are in Shell and resigned from the company. He then realized that he really enjoys his new job as a guidebook writer, especially on new computer manuals that will be developed. In the early 1970s, he got his new job as the author of a guide for computer company Intel's new microprocessor. 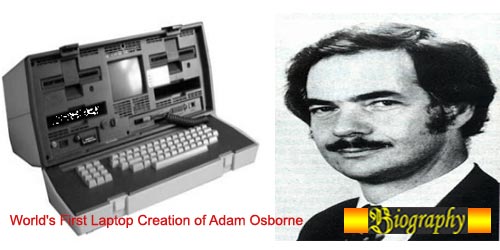 Osborne continued loss of jobs as a writer and in 1972 tried to establish Osborne and Associates, a company engaged in the field of writing computer manuals that are simple, convenient, and easy to read for computer enthusiasts. He also wrote a book entitled "The Value of Power", which later changed its title to "An Introduction to Microcomputers". He tried to offer the book to a publisher who was in town. However, unfortunately, they were rejected. He never despair. Then, he decided to try to publish the book itself.

In an event at a club of computer users, he could show his book to Bruce Van Natta of AMSAI, one of the well-known computer company in the US. After reading the book, Van Natta interested and decided to include a book on every computer IMSAI to be sold. With a good start and mutual benefit, as well as the belief that people will be abuzz looking for books that can guide on a computer readable and understandable, Osborn tried to set up his own publishing company called Osborn Books.

Five years later, Osborne Books publisher has published more than 40 titles on the computer. Then in 1979, for one thing, Osborne sold his publishing company McGraw-Hill. At the same time, he began trying to write in a column for computer magazines Interface Age and Infoworld. He was sure the computer would be really useful if the computer is made mobile (can be taken anywhere) and dynamic with the people who use them, and can be used anytime and anywhere people were. He began to think that someday existing computer company that would understand concepts (ideas) that is in his head. However, the computer company that is not yet ready with its concepts. Having sold his publishing company, Osborn began to divert his energies to designing a portable computer, attractive, easy to use, and powerful.

Designing Portable Computers First Ancestor of Laptop
In March 1980, in the show "West Coast Computer Faire", he met with Lee Felsenstein, an expert who designed the circuit board for processor technology. Felsenstein start a business engaged in the manufacture of hardware (hardware). Its hardware company that not only manufactures portable computers, but also offers its software.

Felsenstein began interested in following an idea proposed by Osborne, he began designing a portable computer, which will be able to be stored under a seat in an airplane. The computer weighs only 24 pounds, has a display (display) 52 column that will be enough in the 5-inch screen, the protective tube, and two disk drives. In order to meet the needs of small displays, Felsenstein try to save a full screen in memory, and provide convenience to the user when they press the buttons in order to display the screen roll.

So its hardware materialize, Osborne tried to contact some of the software provider and make arrangements to provide the BASIC language and CBASIC, WordStar word processing and data processing programs SuperCalc on each computer. Sotware-market price of the software is about $ 2,000, which led to the original Osborne should raise the price of each unit sold. Osborne began to introduce his new computer, which was named the Osborne 1, in the "West Coast Computer Faire" in April 1981. The computer is a portable computer that its software can be acquired at a price of $ 1,795 and is a breakthrough surprising and promising to reach sales success. On September 1981, Osborne Computer Cooporation (OCC) scored its first sale of millions of dollars. In fact, Osborne 1 became one of the best-selling PC and many were sold that quickly reach peak sales of approximately 10,000 units per month.

In the second year, the company owned Osborne achieve the sales target of 70 million dollars. This overwhelming competitors, such as IBM and Apple. It was very aggravated when Osborne announces his new computer, Executive, long before the goods are ready to be marketed. This makes consumers stop buying against Osborne 1 while waiting for a new computer that will be released. However, unfortunately, in September 1983, without known with certainty, OCC bankruptcy. Because sales are not selaris Sales Executive Osborne 1.

In the spring of 1984, Osborne returned to the publishing business. His new firm called Paperback Software International Ltd. Initially, he attempted to publish software that is inexpensive to rival expensive softwares that are on the market at that time. The first time, the idea was met success and he was able to take over and to attract consumers, especially computer companies in the UK. Osborne's most successful product is a data processing program called VP Planner. Unfortunately, Lotus Development Corporation feels that the program violates the patent rights of their program, Lotus 1-2-3. In 1987, Lotus sue the software, and charge the cost of the software license. After going through a long process in court, the court ultimately decided that doubling the menu interface of Lotus 1-2-3 software has infringed the patent.

However, Adam Osborne was an inventor of genius about how to make a portable computer that gives easiness for computer users. Not undeniably brilliant ideas will be very useful for people who use computers today. Adam Osborne died in Kodiakanal, southern India, on March 25, 2003 after a prolonged illness on the brain.